ORDER a copy of The Angle of Flickering Light from the following local indie bookstores: Water Street Bookstore in Exeter, NH, Print: A Bookstore in Portland, ME, Brookline Booksmith in Brookline, MA, Kelly’s Books to Go in ME, River Run Bookstore in Portsmouth, NH, & Toadstool Bookstores in NH.

OR, buy from one of the options below: 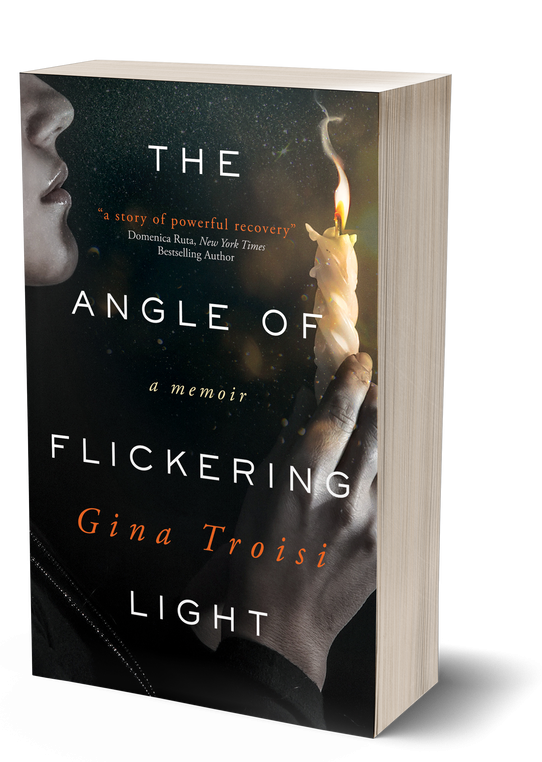 Praise for The Angle of Flickering Light:

“The psychological abuse Troisi endured as a child had my fists clenching in rage. It is almost a relief when she at last finds escape – in drugs, in codependent love, on the open road. But this is a story of powerful recovery in the truest sense of the word, the journey of a woman who reclaims a sense of home in the sanctity of the self.”

– Domenica Ruta, New York Times Best Selling Author of With or Without You

“There’s an element of the mythic in Gina Troisi’s memoir: the evil stepmother, the father with misplaced family loyalties, the daughter whose light eventually shines. Except here the tale – as with much of real life – is riddled with addiction, both substance and sexual. And the heroine is far more likely to wear broken sandals than crystal slippers. Unlike Cinderella, Troisi’s journey to royalty (read sanity and acceptance) isn’t magical; it’s slow and hard-won. The story isn’t less miraculous for that, but more so.”

– Sue William Silverman, Author of How to Survive Death and Other Inconveniences

“In prose both lucid and visceral, Gina Troisi chronicles her progress through a very harsh landscape, one marked by casual cultural horrors and punishing intimate ones, the effects of conceit, emotional numbness and addiction on the part of others—a parent, step-parent, lover—that can entangle a caring person in pointless love and profound confusion. The narrator is remarkably honest about what she suffered and learned but also how she kept a thread of herself alive. How she comes through is inspiring in the basic sense—spirit making her whole, spirit finding itself in words.”

– Baron Wormser, Author of Songs From a Voice and The Road Washes Out in Spring

“A father’s serial impropriety marked Gina Troisi’s childhood and led to a maze of self and soul abuse, but don’t think for a minute that this is a story illuminated by anything dimmer than the brightest constellation. I leave these pages so grateful for this story, for the author’s bravery and honesty, and for this stunning illustration of how writing can carry us through”

– Suzanne Strempek Shea, Author of Songs from a Lead-Lined Room

“Gina Troisi takes a reader so deep into the waters of desire and regret that you see how easily one can drown. We watch almost-drowning, and we watch the difficult retrieval of a life. This memoir of childhood suffering and the multitude of ways (drugs, alcohol, and love affairs) to avoid the resulting life-long pain is not just intelligent, honest and engaging; it is orchestrated like a song through the depths and back up to the high, light notes. It is one person’s roadmap toward wisdom, not as a lesson but as a testament.”

– Fleda Brown, Author of Flying Through a Hole in the Storm

“The author Tony Ardizzone once remarked to me that trauma forces us to abstract the self from the self, and that writing does the same.  Both are in evidence in Gina Troisi’s harrowing memoir, The Angle of Flickering Light. How do we survive our own lives? The trauma of parental neglect and step-maternal manipulations leads the narrator into self-sedation with drugs and alcohol, a series of dangerous relationships, and geographic instability.  She becomes a self-punitive divided self.  She writes, ‘It fascinates me that we don’t know the language of our own faces.’

Later she writes, ‘But I was no longer the person I was when I’d taken off to California ; I had known this but it was magnified in this room where I watched the girl I used to … and who left herself with nothing.’

But the writer self and the traumatized self find unity in writing.  The final line reads: ‘These moments take me out of myself and into something greater, every sweet smell of lilac, every drink of outside air, every silvery raindrop glistening on a naked tree branch bringing me back here, to this solo endeavor that grants me relief, prompts me to walk outside and plant my feet on the dirt and dandelions, to find myself at home.’

At home, she discovers something rather than nothing.”

– Joan Connor, Author of How to Stop Loving Someone

“At once deeply personal yet pulsing with the universally familiar aches of love and longing, The Angle of Flickering Light brings us into Gina Troisi’s moving search for identity and belonging. In fourteen essays that wrest meaning from a youth and young adulthood irrevocably shaped by her father’s infidelity, her grandfather’s death, and her lover’s heroin addiction, Troisi shows us that—even after we’ve been unmoored—it’s possible to reimagine who we are, and redefine what it means to come home.”

– Tim Hillegonds, Author of The Distance Between